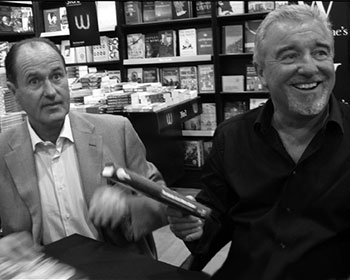 Is there life after football?

Here is a small selection of the stories that proved that there definitely is a very interesting life after football for many players. (Please bear in mind that these stories are from the first edition and may well be out of date now!)

After leaving the game, Harvey firstly ran a pub, then worked delivering fruit and veg to the hotels of Harrogate. Became player/manager at Whitby in 1985 and worked as a postman in Knaresborough, Yorkshire. However, he has now started a new life in the Orkney Islands, where he has purchased a large old farmhouse and several animals and worked as a postman again.

Ron brought Bramhill golf course in Wiltshire for £400,000 and is reputed to have sold it in 1989 for £2 million to golf professional Roger Mace and ex-Doncaster Rovers and Aldershot Goalkeeper - Glen Johnson. Owned a holiday chalet and fishing complex in a picturesque setting in a village near Warminster, Wiltshire but is now retired. Ron is still a regular at Stamford Bridge where he conducts the legends tours around the ground.

Played for Burnley and Accrington Stanley. Phil Collins named a 'B' side on one of his singles 'Don't Call Me Ashley' - because of their similarity in looks! Became reserve team coach at Turf Moor in 2010 but left after only one season and also held a similar role at Bury. Ashley was appointed manager of Conference North side Colwyn Bay in May 2015.

David became a journalist in Leicester, going on to become a household name as a BBC television sports presenter. Now lives in relative seclusion on the Isle of Wight and unfortunately has become better known for his unconventional beliefs which regularly hit the headlines and is now a successful After Dinner Speaker. Now a proliofic maker of videos and author of numerous books.

Capped by England, Paul had an illustrious career, appearing over 500 times in a Leeds shirt and won almost honour both domestically and in Europe. He and his brothers sold their chain of 26 D.I.Y stores for £27 million in 1987. In 1992 he successfully underwent an operation to remove a brain tumour but was diagnosed with Parkinson's Disease in 2004. Latterly, he acted as a property consultant from his home in Yorkshire.

'Hello, me old flower!' The unmistakable words of Charlie Williams, one of Britain's best loved comedians. Charlie never intended to become a comedian. He had his sights firmly set on a career in professional football. Indeed, he played for Doncaster rovers for twelve years. But he enjoyed singing, particularly Nat King Cole - he sang in the dressing room, in the showers, in the coach on the way home or to a game... and told funny stories too. Encouraged by his mates, he started entertaining in the Working Mens Clubs in Yorkshire on Saturday evenings - and the rest as they say... is history! Charlie passed away in 2006 at the age of 78.