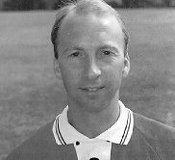 Biography: Worked for a number of clubs in a number of positions is currently Academy Manager at Charlton. (Selected for a Football League XI in 1988).

Do you have any interesting, happy, or humorous memories of Steve?
If so, please let us know and we will be happy to share them with the world!

Gritt, Steve Steve was released by Bournemouth as an 18 year old and came to Dorchester,where at the time he played up front with Ron Davies the ex Saints centre forward. They were an exciting pair to watch at that level. After three matches I was so impressed with Steve that I went and found the Club Secretary at Dorchester and asked if he had signed Steve Gritt on a contract. The reply was 'No' . Within 2 weeks Charlton Athletic came in and took him,(presumably for nothing) where he went on to have a very successful career for many years. Dorchester's loss was Charlton's gain! 12-10-20 Colin Masters

GRITT, Steve No-one who was there, will ever forget what you did for the club. We wouldn't be where we are now if it wasn't for you. Every football club has stages of good spells and bad. One day it will be your day. Enjoy it when it comes because you never know how long it will last. Brighton til i die! Joy Duncan